The first response that usually comes to everyone’s mind is “of course, the second decision was better”. But this is not necessarily the case. Can you think of a scenario where your response would be the opposite?

I’ve been thinking and reading about decision-making for many years while trying to put everything I learned into practice. Below, I summarize the strategies and mental models that I personally found most useful.

The Process vs. The Outcome

We all have a natural tendency to judge decisions based on their outcomes. This is not the worst heuristic, as there is a correlation between the quality of decisions and outcomes. But this heuristic has a major flaw — it doesn’t account for luck and incomplete information.

END_OF_DOCUMENT_TOKEN_TO_BE_REPLACED

Wouldn’t it be nice if you could always be on top of what your competition is up to without making this your full-time job?

There are many online tools available in 2018 that can help you achieve exactly that.

For the purposes of this post, I will omit all the context about competitive intelligence — what it is, why it’s important, how to do it systematically, and how to make it actionable. Instead, I will simply list useful tools and apps and provide brief descriptions.

Listen to Their Customers

Listen to Their Employees

Review Their Funding and Investors

See Whom They Are Hiring And Where

Automatically Receive News About Your Competitors

Stay on Top of Company Announcements

Browse reports published by these companies:

Let me know if I left anything out!

Trying to market your product without knowing whom you should market to is like walking blindfolded. You might still end up in the right place. But it’s not very likely.

Any Customers Vs. Ideal Customers

A new startup might try anything to get its first customers. At this exploration stage, you cast the net wide. You approach different individuals and companies and do whatever it takes. Any customer is a great customer.

But as the company grows, it learns that not all customers are created equal. Some are easier to acquire. Others benefit more from the product and are easier to retain. Yet others are easier to expand and upsell to.

This raises a question. How do you know who is your primary target audience?

At an early stage, you “just know” your ideal customer. Your ideal customer profile is whoever was willing to buy your first product or sign an agreement before you even developed a prototype.

Of course, you can always stop here.

But if you’re planning to become a world-class company, you might need to take it to another level and make sure that your marketing is also world-class. All top technology–, and more narrowly, Software as a Service (SaaS) companies have a very clear understanding of their ideal customer profile. Even though this post will be particularly relevant to this type of company, the general principles can be applied to any industry.

A side-note on terminology: terms such as “ideal customer profile” and “target audience” are often used interchangeably. “Buyer Persona” is another similar term that emphasizes the focus on individuals – as opposed to companies.

An ideal customer is a customer that is more likely to like your product and pay for it. Knowing your ICP should help you grow revenue while investing less. This higher return on investment is achieved through better targeting among other things.

Imagine, you sell software that helps cities analyze traffic patterns and make better urban planning decisions. You could place a TV commercial and hope that the right people will see it. This would be utterly inefficient.

Alternatively, you could identify a subset of cities that are most likely to adopt this type of software, then identify the right officials who are most likely to be decision-makers and target them with a proposal that addresses their specific pains and explains how your product can alleviate them. Needless to say, this would be infinitely more effective.

And, by the way, customers will also appreciate this targeted approach. See “Principles of Ethical Marketing” for more on this.

If you need more reasons: 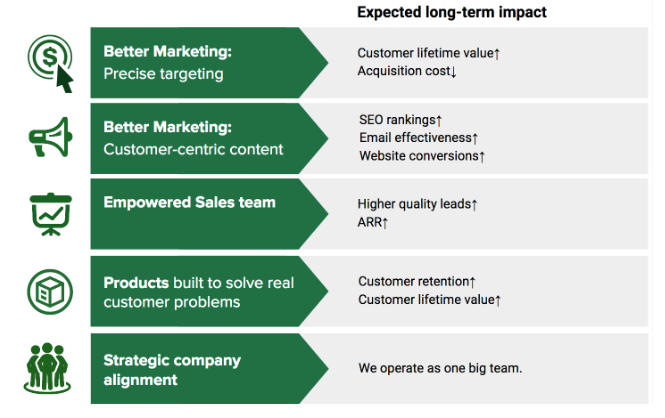 How to Develop ICP

The approach will depend on a number of things:

END_OF_DOCUMENT_TOKEN_TO_BE_REPLACED

If I asked you these questions right now, would you be able to answer them?

Seriously, stop reading right now and try to answer these questions aloud or in your head.

Can you answer these questions in 1-3 sentences and in a clear way that wouldn’t invite follow-up questions from an average customer?

Can everyone in your organization?

What is a Value Proposition?

In order to find its product-market fit, startups need to come up with value proposition statements for its products. At first, you start with a hypothesis or a guess if you will.

This hypothesis then needs to be validated with customers and refined as the product evolves and as the company acquires more knowledge about the market and customers.

A validated value proposition statement is the ultimate outcome of finding the product-market fit. This statement should encapsulate the key insights you’ve gathered about customers, as well as unique product strengths.

Do You Need One?

If you don’t have one, you’re shooting in the dark. If you have one but it’s not validated, you might be deluding yourself.

Here are some practical benefits of developing a value proposition:

END_OF_DOCUMENT_TOKEN_TO_BE_REPLACED

“How Google Works” by Eric Schmidt, despite being quite self-congratulatory and maybe even prone to confirmation bias, is full of inspirational ideas and bids of practical wisdom to learn from. I took a few (ok, quite a few) notes on smart creatives, decision making, hiring, innovation, strategy, career, management and even managing email.

“And who, exactly, is this smart creative? A smart creative has deep technical knowledge in how to use the tools of her trade and plenty of hands-on experience. In our industry, that means she is most likely a computer scientist, or at least understands the tenets and structure of the systems behind the magic you see on your screens every day. But in other industries she may be a doctor, designer, scientist, filmmaker, engineer, chef, or mathematician. She is an expert in doing. She doesn’t just design concepts, she builds prototypes. She is analytically smart. She is comfortable with data and can use it to make decisions. She also understands its fallacies and is wary of endless analysis. Let data decide, she believes, but don’t let it take over.

She is business smart. She sees a direct line from technical expertise to product excellence to business success, and understands the value of all three. She is competitive smart. Her stock-in-trade starts with innovation, but it also includes a lot of work. She is driven to be great, and that doesn’t happen 9-to-5. She is user smart. No matter the industry, she understands her “get it right the next time around. She is self-directed creative. She doesn’t wait to be told what to do and sometimes ignores direction if she doesn’t agree with it. She takes action based on her own initiative, which is considerable.

She is open creative. She freely collaborates, and judges ideas and analyses on their merits and not their provenance. If she were into needlepoint, she would sew a pillow that said, “If I give you a penny, then you’re a penny richer and I’m a penny poorer, but if I give you an idea, then you will have a new idea but I’ll have it too.” Then she would figure out a way to make the pillow fly around the room and shoot lasers.

She is thorough creative. She is always on and can recite the details, not because she studies and memorizes, but because she knows them. They are her details. She is communicative creative. She is funny and expresses herself with flair and even charisma, either one-to-one or one-to-many.”

“Hippopotamuses are among the deadliest animals, faster than you think and capable of crushing (or biting in half) any enemy in their path. Hippos are dangerous in companies too, where they take the form of the Highest-Paid Person’s Opinion. When it comes to the quality of decision-making, pay level is intrinsically irrelevant and experience is valuable only if it is used to frame a winning argument. Unfortunately, in most companies experience is the winning argument. We call these places “tenurocracies,” because power derives from tenure, not merit. It reminds us of our favorite quote from Jim Barksdale, erstwhile CEO of Netscape: “If we have data, let’s look at data. If all we have are opinions, let’s go with mine.”

When you stop listening to the hippos, you start creating a meritocracy, which our colleague Shona Brown concisely describes as a place where “it is the quality of the idea that matters, not who suggests it.” Sounds easy, but of course it isn’t. Creating a meritocracy requires equal participation by both the hippo, who could rule the day by fiat, and the brave smart creative, who risks getting trampled as she stands up for quality and merit.”

On technical insights as a driver of innovation:

“Bet on technical insights, not market research. Product leaders create product plans, but those product plans often (usually!) lack the most important component: What is the technical insight upon which those new features, products, or platforms will be built? A technical insight is a new way of applying technology or design that either drives down the cost or increases the functions and usability of the product by a significant factor. The result is something that is better than the competition in a fundamental way. The improvement is often obvious; it doesn’t take a lot of marketing for customers to figure out that this product is different from everything else.

For example, at that time Google was experimenting in applying some of our expertise from online advertising to other advertising markets, including print, radio, and TV. These were clever efforts, supported by smart people, but they lacked that fundamental technical insight that would shift the cost-performance curve non-incrementally and provide significant differentiation. All three ultimately failed. And when we look back at other Google products that didn’t make it (iGoogle, Desktop, Notebook, Sidewiki, Knol, Health, even the popular Reader), they all either lacked underlying technical insights from the outset, or the insights upon which they were based became dated as the Internet evolved.”