👋Say hi on Twitter and tell me whom I’m missing!

In case you’ve missed the new (well, 1.5 months old) 2017 KPCB Internet Trends report, here it is. As always, it’s a fascinating 355-slide deck of charts and graphs that cover everything from advertising to macroeconomics.

Here are some less than obvious insights I noted. What did you find interesting?

END_OF_DOCUMENT_TOKEN_TO_BE_REPLACED

Enjoying reading Antonio‘s Chaos Monkeys now. The book is a rather honest account of launching and working at tech startups in the Valley.

Here is a quote on math behind Facebook growth, for example:

“The reality is that Facebook has been so successful, it’s actually running out of humans on the planet. Ponder the numbers: there are about three billion people on the Internet, where the latter is broadly defined as any sort of networked data, texts, browser, social media, whatever. Of these people, six hundred million are Chinese, and therefore effectively unreachable by Facebook. In Russia, thanks to Vkontakte and other copycat social networks, Facebook’s share of the country’s ninety million Internet users is also small, though it may yet win that fight.

That leaves about 2.35 billion people ripe for the Facebook plucking. While Facebook seems ubiquitous to the plugged-in, chattering classes, its usage is not universal among even entrenched Internet users. In the United States, for example, by far the company’s most established and sticky market, only three-quarters of Internet users are actively on FB. That ratio of FB to Internet user is worse in other countries, so even full FB saturation in a given market doesn’t imply total Facebook adoption. Let’s (very) optimistically assume full US-level penetration for any market. Without China and Russia, and taking a 25 percent haircut of people who’ll never join or stay (as is the case in the United States), that leaves around 1.8 billion potential Facebook users globally. That’s it. In the first quarter of 2015, Facebook announced it had 1.44 billion users. Based on its public 2014 numbers, FB is growing at around 13 percent a year, and that pace is slowing. Even assuming it maintains that growth into 2016, that means it’s got one year of user growth left in it, and then that’s it: Facebook has run out of humans on the Internet.

The company can solve this by either making more humans (hard even for Facebook), or connecting what humans there are left on the planet. This is why Internet.org exists, a vaguely public-spirited, and somewhat controversial, campaign by Facebook to wire all of India with free Internet, with regions like Brazil and Africa soon to follow. In early 2014 Facebook acquired a British aerospace firm, Ascenta, which specialized in solar-powered unmanned aerial vehicles. Facebook plans on flying a Wi-Fi-enabled air force of such craft over the developing world, giving them Internet. Just picture ultralight carbon-fiber aircraft buzzing over African savannas constantly, while locals check their Facebook feeds as they watch over their herds.”

Recently I finished reading What Would Google Do by Jeff Jarvis. Judging by title I didn’t really expect lots of insights from the book but it appeared to be truly visionary and smart. It even made me kind of regret choosing Economics&Business major over Computer Science 7 years ago… 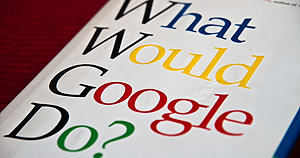 WWGD appeared not to be about Google itself but about the way business, economics, relationships, and the world as a whole change as the result of technologies widespread and simplification. So, in fact, the book covers quite a wide range of topics. From Google’s PageRank, to Facebook, new media, customized solutions, customer relations, blogging, Twitter, context advertising, search engine optimization, online community management, government policies, and many others.