Feynman is one of the brightest physicists of the 20th century who also happened to be a talented lecturer and an author of a book which is fun to read. Here are some excerpts from “Surely You’re Joking, Mr. Feynman” that I found interesting: 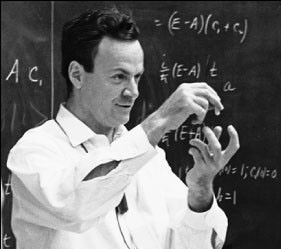 So I have just one wish for you–the good luck to be somewhere where you are free to maintain the kind of integrity I have described, and where you do not feel heed by a need to maintain your position In the organization, or financial support, or so on, to lose your integrity. May you have that freedom.

Isn’t it a modern luxury that very few of us can afford?

When it came time to evaluate the conference at the end, the others told how much they got out of it, how successful it was, and so on. When they asked me, I said, “This conference was worse than a Rorschach test: There’s a meaningless inkblot, and the others ask you what you think you see, but when you tell them, they start arguing with you!

On mindfulness and watching your thoughts become dreams:

I also noticed that as you go to sleep the ideas continue, but they become less and less logically interconnected. You don’t notice that they’re not logically connected until you ask yourself, “What made me think of that?” and you try to work your way back, and often you can’t remember what the hell did make you think of that!

So you get every illusion of logical connection, but the actual fact is that the thoughts become more and more cockeyed until they’re completely disjointed, and beyond that, you fall asleep.

After four weeks of sleeping all the time, I wrote my theme, and explained the observations I had made. At the end of the theme I pointed out that all of these observations were made while I was watching myself fall asleep, and I don’t really know what it’s like to fall asleep when I’m not watching myself. I concluded the theme with a little verse I made up, which pointed out this problem of introspection:

One night, while I was having a dream, I realized I was observing myself in the dream. I had gotten all the way down into the sleep itself!

Interestingly enough, it eventually got him into a lucid dream.

All through the demonstration I was vaguely aware of what was going on, and cooperating with the things the hypnotist said, but this time I decided, “Damn it, enough is enough! I’m gonna go straight to my seat.”
When it was time to get up and go off the stage, I started to walk straight to my seat. But then an annoying feeling came over me: I felt so uncomfortable that I couldn’t continue. I walked all the way around the hall.

I was hypnotized in another situation some time later by a woman. While I was hypnotized she said, “I’m going to light a match, blow it out, and immediately touch the back of your hand with it. You will feel no pain.” I thought, “Baloney!” She took a match, lit it, blew it out, and touched it to the back of my hand. It felt slightly warm. My eyes were closed throughout all of this, but I was thinking, “That’s easy. She lit one match, but touched a different match to my hand. There’s nothin’ to that; it’s a fake!”

When I came out of the hypnosis and looked at the back of my hand, I got the biggest surprise: There was a burn on the back of my hand. Soon a blister grew, and it never hurt at all, even when it broke. So I found hypnosis to be a very interesting experience. All the time you’re saying to yourself, “I could do that, but I won’t”–which is just another way of saying that you can’t.

Feynman is an interesting person to hear about hypnosis from. I don’t think it’s  easy to find somebody with a more skeptical mind. What I find intriguing is how one’s brain can theoretically become conditioned to be inclined to do or feel one thing over the other. And what would be awesome is to use it consciously to condition yourself.

On learning instead of memorizing

So I tell them that one of the first things to strike me when I came to Brazil was to see elementary school kids in bookstores, buying physics books. There are so many kids learning physics in Brazil, beginning much earlier than kids do in the United States, that it’s amazing you don’t find many physicists in Brazil–why is that? So many kids are working so hard, and nothing comes of it.

Then I gave the analogy of a Greek scholar who loves the Greek language, who knows that in his own country there aren’t many children studying Greek. But he comes to another country, where he is delighted to find everybody studying Greek–even the smaller kids in the elementary schools. He goes to the examination of a student who is coming to get his degree in Greek, and asks him, “What were Socrates’ ideas on the relationship between Truth and Beauty?”–and the student can’t answer. Then he asks the student, What did Socrates say to Plato in the Third Symposium?” the student lights up and goes, “Brrrrrrrrr-up”–he tells you everything, word for word, that Socrates said, in beautiful Greek.

But what Socrates was talking about in the Third Symposium was the relationship between Truth and Beauty! What this Greek scholar discovers is, the students in another country learn Greek by first learning to pronounce the letters, then the words, and then sentences and paragraphs. They can recite, word for word, what Socrates said, without realizing that those Greek words actually mean something. To the student they are all artificial sounds. Nobody has ever translated them into words the students can understand. I said, “That’s how it looks to me, when I see you teaching the kids ‘science’ here in Brazil.” (Big blast, right?)

“I have discovered something else,” I continued. “By flipping the pages at random, and putting my finger in and reading the sentences on that page, I can show you what’s the matter–how it’s not science, but memorizing, in every circumstance. Therefore I am brave enough to flip through the pages now, in front of this audience, to put my finger in, to read, and to show you.”

So I did it. Brrrrrrrup–I stuck my finger in, and I started to read:  Triboluminescence. Triboluminescence is the light emitted when crystals are crushed.. I said, “And there, have  you got science? No! You have only told what a word means in terms of other words. You  haven’t told anything about nature-what crystals produce light when you crush them, why  they produce light. Did you see any student go home and try it? He can’t.

“But if, instead, you  were to write, ‘When you take a lump of sugar and crush it with a pair of pliers in the dark, you can see a bluish flash. Some other crystals do that too. Nobody knows why. The phenomenon is called “triboluminescence.”‘ Then someone will go home and try it. Then there’s an experience of nature.” I used that example to show them, but it didn’t make any difference where I would have put my finger in the book; it was like that everywhere.

Overall, it’s an amazing memoir with stories varying from building an atomic bomb to picking up girls.