Most likely a majority of readers have already heard about this famous experiment, probably on multiple occasions. Those who have not though might find it both eye-opening and terrifying. Here is the brief summary of what has been done:

Milgram told his forty male volunteer research subjects that they were participating in a study about the effects of punishment on learning. He assigned each of the subjects to the role of teacher. Each subject was told that his task was to help another subject like himself learn a list of word pairs. Each time the learner made a mistake, the teacher was to give the learner an electric shock by flipping a switch. The teacher was told to increase the shock level each time the learner made a mistake, until a dangerous shock level was reached.

Throughout the course of the experiment, the experimenter firmly commanded the teachers to follow the instructions they had been given. In reality, the learner was not an experiment subject but Milgram’s accomplice, and he never actually received an electric shock. However, he pretended to be in pain when shocks were administered.

Prior to the study, forty psychiatrists that Milgram consulted told him that fewer than 1 percent of subjects would administer what they thought were dangerous shocks to the learner. However, Milgram found that two-thirds of the teachers did administer even the highest level of shock, despite believing that the learner was suffering great pain and distress. Milgram believed that the teachers had acted in this way because they were pressured to do so by an authority figure. 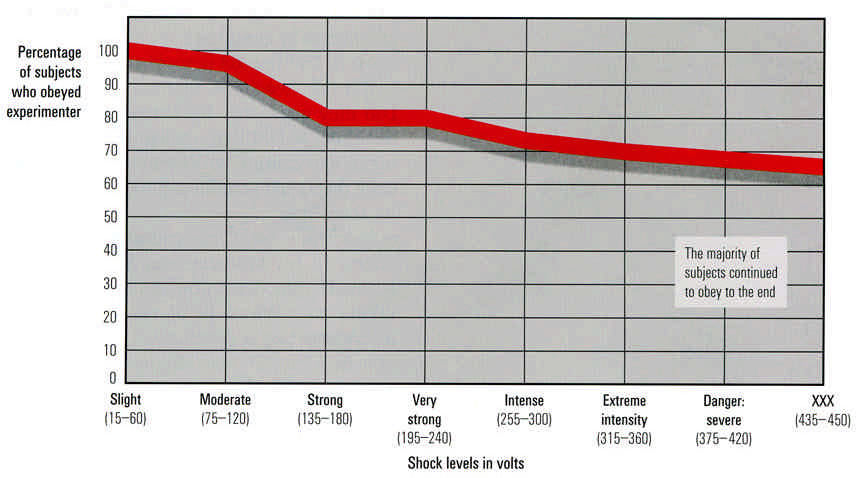 Implications and conclusions are almost endless. From insights into  reasons why throughout history ordinary people “just doing their job” could do so much evil to potential implications on how to foster independent thinking and prevent groupthink by creating proper organizational structures and corporate culture in work environment.

There are also a lot of documentaries on Youtube about it. Here is just one of them: