I’ve just finished listening to an interesting audiobook about memory and mnemonic techniques: Moonwalking with Einstein by Joshua Foer. Author is a young journalist who decided to try all the memory improvement techniques himself but remain sceptical and objective while doing so. He talks about memory itself and the way it was influenced by spread of written language and by technology. Than, he tells us stories about people with extraordinarily good memory and amnesiacs, about people who had an ordinary memory but became memory champion and about mnemonic techniques they used. 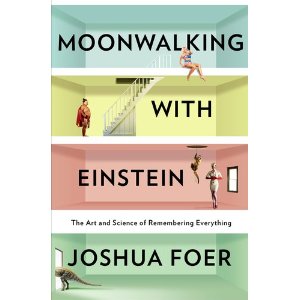 Joshua begins his quest with a totaly ordinary, if not mediocre, memory. Bus after long preparation and work with best so-called “mental athletes” wins one of US memory champtionships. Although he himself acknoledges the fact that most of techniques he learned are useless in day-to-day life, I actually extracted a lot of intersting and useful ideas from the book. And this is what I would like to share with you.

However, it is less clear how to apply it all to learning things that might actually be useful, such as grammar rules, math formulas or just life experiences. Any ideas?
Overall, there are not so many practically applicable things in the book but it is still very interesting to read.
Here is the short interview with an author that covers many of the topics from the book:
You might also like my other post: “2 books about brain: What best neuroscientists can teach us about memory, creativity, society, productivity, work & leadership“.